I both cannot afford all the things I want on that list, nor do I have the space in my home for it.  But it’s fun to make one anyway.  I’ve already covered the cool things to buy at the Disney Dream Store, Disney Music Emporium, and from Disney Publishing.  Can you believe there is even more?  With the Disney Store always being an extremely popular destination pavilion and Mickey’s of Glendale from Walt Disney Imagineering opening its doors to the public on this rare occasion, you can be sure there are plenty of things to buy.  I need to start a GoFundMe page just for my trip to the Expo.

Disney Store – The Disney Store pavilion is one of the most popular at the Expo.  I don’t even know why as it is almost impossible to get in there!  But they do have some really cool stuff.  In 2015, they sold limited edition Once Upon A Time dolls and if you bought one you could get them signed by Lana Parilla and Ginnifer Goodwin.  This year they haven’t announced (yet) anything THAT cool, but they are offering some pretty awesome stuff.

In addition to that, they are releasing a limited edition Bambi wall clock (LE 500), a Disney Designer Collection set of ornaments (LE 300), a special Oswald plush for his 90th anniversary, limited edition Tsum Tsum  every day, a Limited Edition Minnie Mouse to celebrate her signature collection, and even limited edition Marvel items including a pin set (I need to get THAT).  They are even releasing a special Star Wars Hero and Villain action figure sets!  You can buy Leia and Vader, Rey and Kylo Ren, and Rey and Krennic for $79.95 a set (LE 1000).  And again, that’s just SOME of the stuff they are coming out with. 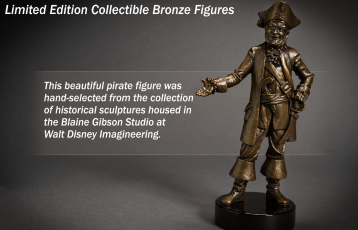 Mickey’s of Glendale – This pop up shop usually in the back of the Imagineering pavilion will open its doors to the public for a rare opportunity to buy exclusive Imagineering products including limited edition pins, artwork, shirts, sweatshirts, mugs, backpacks, and other collectible items.  In the past, they’ve offered a different limited edition pin every day and pin collecting is one of the highlights of their collection.  Most of their pins are small runs (300 or 500 usually) so they are not only highly collectible but beautiful, too.  Plus, if you ever wanted a shirt or backpack or messenger bag with the Imagineering logo, this is your chance.  As a Sorcerer’s Package ticket holder, MoG let us know they are releasing two bronze sculptures just for this event – one featuring a pirate and one featuring Mickey in his Sorcerer’s Apprentice outfit.

New Balance – As the official sponsor of runDisney events, New Balance has in the past been at every D23 Expo and they offer their exclusive running shoes with Disney designs.  These are beautiful shoes and offer great support and style at the same time while being in limited release.  My understanding is that each shoe is offered once a year with a new design for that shoe being released the next.  I’ve been collecting the Mickey Mouse shoe and have loved it!  There hasn’t been any official announcement about their involvement, but if you get the chance, head over to their area and get some shoes!