What happened to Ahsoka between The Clone Wars and Star Wars Rebels?  How did she go from former Jedi Padawan to Fulcrum?  Now she’s dead (or is she?) and we still don’t know what happened to those lost years of her history – until now!  Dave Filoni, co-creator and executive producer of Rebels, and Pablo Hidalgo of the Lucasfilm Story Group came onstage at Star Wars Celebration 2016 with the voice of Ahsoka herself, Ashley Eckstein.  In their panel, they shared the Untold Stories of Ahsoka Tano – stories that bridge the gap and tell us what happened to her.  Some of the stories were fully laid out and others were in “loose scripts and story ideas” as Pablo told us, but all of them were interesting.  What follows is a summary of the panel highlighting interesting parts of Ahsoka’s story and a BIG REVEAL at the end.  However, you can simply watch the entire episode on YouTube (video above), but as it runs over an hour, the shortened version is below.

First they shared a story about how Ahsoka was brought to the Jedi that explained more about how Jedi children were found.  Dave said that we kind of have this image of Jedi children leaving their homes but that in some cultures its a time of celebration!  To have one of your own chosen to be a Jedi would be a great honor.  But few people actually have met the Jedi and because Jedi children are so rare, they are sometimes hunted as commodities.  So in Ahsoka’s story, a bounty hunter named Latrans posed as a Jedi to take her away but Plo Koon intervened.  Dave mentioned how different these two would look.  Plo Koon is kind of “creepy” while Latrans is smooth and flowing – the moral of the story being “don’t judge a book by its cover.”

The next story they shared was called “Ahsoka’s Walkabout” and it chronicled the time of her leaving the Jedi and trying to establish a new life on her own.  Dave said Ahsoka was “a kid raised in a temple.  She has no idea about how to buy a speeder…she has the burden of trying to live as a normal person on Coruscant.”  The plan was to have Ahsoka meet Nyx Okami (Dave said he wanted an Asian male lead in Clone Wars and was excited about Nyx).  Their adventures together would be an exploration of her growth and self-discovery.  He said he wanted to show young girls that they “don’t have to be with someone just because…Ahsoka (and all young girls) can have her own identity, her own agency, her character and see value in that and not just put value in ‘I’m important because somebody likes me.'”  This is why my daughter and I watch Star Wars Rebels together.  With someone like Dave at the helm, you feel safe.

“Return to the Jedi,” reveals a danger deep beneath the surface of Coruscant.  Ahsoka discovers that there is a Sith temple or remains deep beneath the Jedi Temple and that “nefarious entities” are endangering the life of Master Yoda.  Included in the story is a “sort of” confrontation with the Emperor as Ahsoka seals the passage to the Holocron vaults but is attacked by the Emperor with Force lightning as she does so.  The story is meant to bring Ahsoka back into contact with the Jedi.  She still isn’t allied with them, but does not want to abandon those she loves. 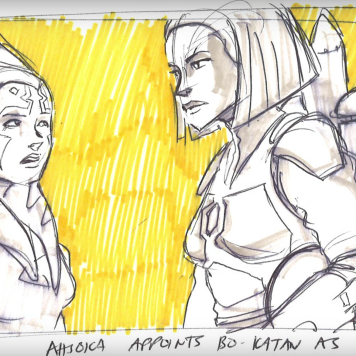 The next story, “Seige of Mandalore” which would reunite Ahsoka briefly with Anakin and Obi-Wan.  Ahsoka is on Mandalore to help Bo-Katan.  Ahsoka finds out the location of Maul and knowing that it would be important to Obi-Wan and therefore Anakin, she gets word to them.  They promise to back her, but are then called away when the Chancellor (Palpatine) is abducted (leading directly into events in Revenge of the Sith).  Anakin promises not to abandon her and they reunite Ahsoka with Rex and his unit from the 501st who go off together to fight for Mandalore and against Maul (which Dave explains is why Rex also isn’t in Revenge of the Sith).

Dave tells us that after the War, Ahsoka is being hunted by the clones and these clones are chasing into the forest on some planet.  When they find her she is sitting peacefully on a stone and the clones threaten to take her in.  At that time the forest seems to come alive and what they thought were trees are actually huge legs of these wolves who are protecting her.  All of these stories lead up to Ahsoka Tano’s new book which will come out in August.  Authored by E.K. Johnston, Dave and Pablo shared all of these details with her so that she would have privy to the full knowledge of Ahsoka’s intended backstory.  Some of these details will be revealed within the pages of the book but Dave gave a hearty recommendation for the book and for E.K. and promises a solid story.

And then at the very end, Dave said that there was a possibility that Ahsoka’s story was not yet done.  She many not come back as fans expect but that she “might still have something to do…”