More than just a collection of pre-production artwork, The Art of Moana showcases the combined research and talent that went into making this beautiful movie.  Everything from the clothing to the landscape to the ocean was studied in intricate detail and shaped the look of the movie.  Andy Harkness, art director of environment, said, “The basic rules of the design style for Moana – using straight lines against curved ones, avoiding parallels, repeating shapes, allowing large areas with very little detail to be punctuated by smaller areas iwth lots of detail – evolved from what we noticed in nature…The landscapes, the specific foliage patterns, and the people themselves inspired the overall look of the film – we stylized what was already there (p.14).”

What inspired the Ron Clements and John Musker who brought Moana to life as the did The Little Mermaid was something told to them by Papa Mape, a Tahitian fisherman and elder they talked to while doing research for the film.  He said to the creators, “For years we have been swallowed by your culture. One time, could you be swallowed by ours?” That talk with Papa Mape influenced how they approached the film and allowed them to approach the story with open eyes.  One of the things they realized was that for the Polynesian people, the ocean wasn’t a barrier to them.  Many of them repeated the same phrase, “The ocean unites us, it doesn’t divide us (p.10).”

The Art of Moana collects these stories and influences into one central place.  While you do see plenty of pre-production artwork and are told the story of the evolution of both the characters and the setting, the heart of this book is about the depth and love for the people and culture of the Pacific Islands.  So much rich detail was put into every aspect of the film to honor the traditions and history of the Oceanic people and you can see that in the pages of this book. For example, Bill Schwab, art director of characters said, “[Executive Producer] John Lasseter pressed us early on to sweat the details in costuming (p.42).” Details like the difference in color usage between the voyagers and the villagers.  Neysa Bove, costume designer and visual development artist for the film said, “The voyagers…brought in a lot of color from the vegetation around them…the Motonui villagers lose their color.  The plants they use are dried, and when things dry they become brown.”  Those are the kind of details the film’s creators put in to Moana and are captured by the authors. 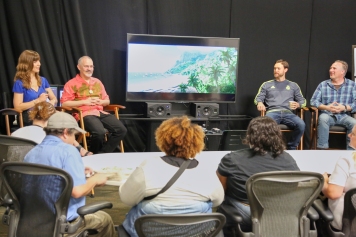 If you love Moana and want to know even more about the background and history of the characters, this is the perfect gift for you.  Or if you’re curious about the dedication to authenticity and detail that Disney puts into their animated films, you’ll love this book, too.  The Art of Moana doesn’t focus as much on “what could have been” or “lost storylines.”  Instead it delves even deeper into the movie and peels back the layers of what you see on screen.