If I were to sum up our Sorcerer preview day, I’d say exhausting.  But filled with tons of special opportunities.  I was surprised at the number of “new” Sorcerers who were there.  We all seemed filled with the same sense of awe about being here with this privilege.  Only getting to see it from afar, it was exciting to find out what might come next.  The veterans helped us out.  They told us what we might expect, shared what worked and what didn’t, and everyone seemed willing to help each other out.  Everyone was so easy to talk to and we shared a love and appreciation of all things Disney. 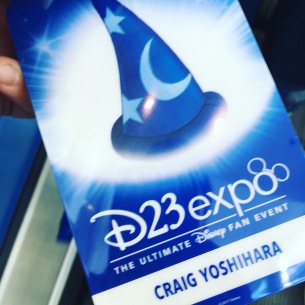 We began the day in the Sorcerer’s Lounge.  They had a quaint continental breakfast set up with nice danishes, muffins, bagels and the accompanying condiments.  Just a little something to jump start our day.  After we had a chance to mill around for a while, Michael Vargo came in to give us a heads up about what to expect.  He gave us the welcome announcement that we would be let in on the Show Floor first every day!  That brought cheers.  Then they offered us a special VR experience found only in the Sorcerer’s Lounge called Walt’s Office where you could virtually visit his office as it was when he was alive, walk around it, pick up all the different items on his desk and on the piano.  Everything had a story and it was an immersive and impressive experience. I didn’t get a chance to do that until later that afternoon because it was shopping time! 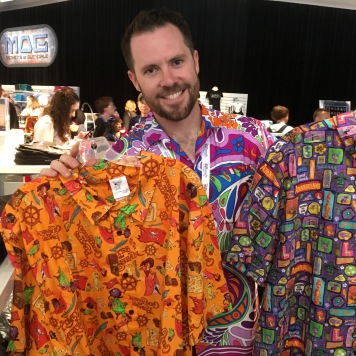 Bronze Sorcerer Mickey, a replica of the one at WDI – only 25 were made

We were allowed to visit all three of the main Disney shopping locations at the Expo a day before they were opened to the public.  Each location opened an hour apart but we were promised that there would be enough limited edition items for everyone.  However, the one item I was hunting for – the LE 25 Sorcerer Mickey – could not possibly fit that description.  With 350 of us and only 25 of them…  Since it was at Mickey’s of Glendale, I waited for that store to open and then headed there first.  Thankfully, I chose well!  I got the Mickey I was looking for as well as an amazing Chinese New Year framed pin set.  Wow.  I was sad because the MOG pin store was not open for preview day and I was really looking forward to it.  But these things happen.  I got some great Hawaiian shirts and had the chance to meet the man who designed them.  Found some great Imagineering stuff and a really impressive Castles of the World Pin Set.  After the final damage to my pocket was tallied, it was off to the Disney Store.

Even with only 350 of us, there was still a very short wait.  Because they were trying to staggering the shopping opportunities, it actually worked out really well for me.  After MOG, I went upstairs to the Sorcerer’s Bag Check (we had our own bag check area staffed just for us), dumped my bags, and headed to the Disney Store just in time for the opening.  We were let in almost immediately and I rushed to get a Mulan Folktale Series Set (beautiful), a set of Mary Poppins Tsum Tsum, some Marvel pins, and the one item I really came for – the Iron Man Hulkbuster!  I thought it was smart for them to limit everyone to 1 item per person.  That way there’s some left for everyone tomorrow.  With only 350 Sorcerers there would still be limited edition items available the next day.

Finally, I hit the Disney Dream Store.  As always, they were SUPER efficient and did a great job getting us in and out.  I was so tired by this time, I think I sort of wandered around in a daze.  I did find some pretty amazing stuff including some special Alex and Ani bangles that were made only for the Expo.  And to add a special touch, they had many of the artists that were appearing over the weekend available to sign your items, including Jerrod Maruyama and SHAG!  After looking around a bit, I went to the registers, bought some more pins, grabbed my items in reserve and headed out.  They also gave us a tour of the show floor and for those who wanted to go, Disney Theatrical was showing off their new VR experience which everyone tells me was terrific.  Honestly I was too tired to go.

Sitting on the couch actually featured in Thor Ragnarok!

Entering the Walt Disney Archives exhibit on Pirates and Disney 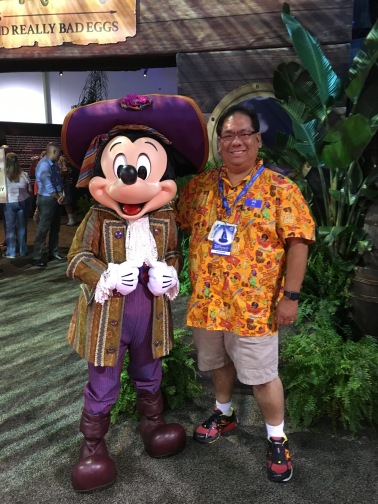 Getting a picture with Pirate Mickey!

Last but not least they gave us a two-hour break for dinner and then had a reception for us that evening.  They should have told us not to eat.  They had delicious crab cakes, three different kinds of sliders, stuffed mushrooms, coconut breaded chicken strips, a taco bar, an open bar (limit 2 per Sorcerer), and a complete dessert table.  After getting some food in us, they made a few announcements and then opened up the Walt Disney Archives pavilion for us.  Featuring the Pirates of the Caribbean, we had the chance to wander through on our own (and take pictures with Pirate Mickey).  They also had a volunteer opportunity for us to take part in.  We had the chance to help paint pictures for a mural that would be hung up in a local charity for children to look at.  Then, to top it off, we went on the rooftop of the Convention Center with soda and popcorn to watch the Disneyland fireworks.  The cool thing about the bucket was we were allowed to refill it all weekend.

After a long day I headed back to the hotel room and collapsed.  It was tiring, but we all had a blast and I made some new Disney friends.  Stay tuned for Day 1 of the Expo!