It’s only January but I guarantee this is a top 5 book of the year!

If you’re a Disney foodie, you MUST have this book!  When it arrived on my doorstep, it captured my attention immediately.  Even though I had a stack of books on my desk to pour over, I couldn’t put this down and HAD to read it.  Marcy Carriker Smothers covers the topic from beginning to end.  From Walt’s favorite foods at home, to the food you could get at the studios to Walt’s favorite places to eat out, to some of his favorite recipes so you can “Eat Like Walt” at home, Marcy has it all between the covers of this fabulous Disney read.  Inside you’ll find concept art, family photos, Walt’s own hand-written notes, and so many other treasures you just need to get this book for yourself. 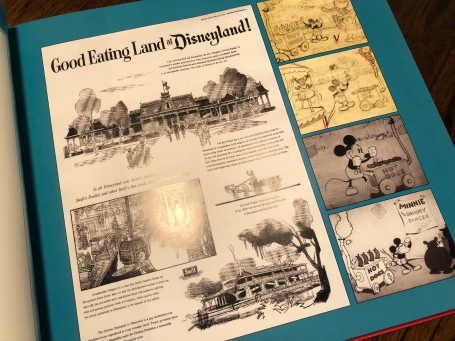 Walt was proud of the food offerings at Disneyland!

One thing that is abundantly clear, Walt had simple tastes.  Mostly a meat and potatoes guy, he loved chili as has been well attested to in many different venues.  But I didn’t know about his love of Jello.  Or that butterscotch was his favorite flavor.  Or that he liked Spam and eggs with biscuits and honey.  Sounds awfully good to me.  But the personal story that wowed me was about Fou Fou.  Thelma Pearl Howard was the family cook since 1951, but she was so much more.  Marcy shared many great stories about how much the kids and grandkids loved her and what she meant to them.  She got the nickname Fou Fou from Walt and Lillian’s grandson Christopher who couldn’t quite say her name and “Fou Fou” stuck.  When she passed away, she was worth about nine MILLION dollars!  Walt had given her stock in the company for birthdays and Christmas, but she rarely sold any as Marcy notes because she felt doing so was “being disloyal to her boss (p.29).”

The write-up about the studios was fascinating.  Marcy describes all the different places there were to eat on the lot and how they developed.  Photos of the different menus and the prices for food were fun to look at, and I was impressed that Walt subsidized the cost of the meals, figuring that “quality meals at fair prices…would increase productivity (p.33).”  While some of the information might be found in other places, so much of it was new and enlightening.  A private Google-like space called The Penthouse?  Waitresses that would serve you in the studio restaurant’s early days?  And then there was the story of Walt’s incredible generosity toward Cecile Van Antwerp, one of the waitresses in the Coral Room.  Much beloved by the entire studio, she was in a horrible car accident.  Walt paid for a plane to medivac her to a hospital near her home and paid for all of her hospitalization expenses the entire three years she needed it.  After her recovery (still a quadriplegic), she was made a Silver Retiree which Marcy describes as “a distinction that normally required twenty-five years of service (p.43).”

In the park, Marcy goes over the history of the different places to eat. Who sponsored them, when they were there, when they left – all of it is covered dutifully with some great stories.  She also highlights stories and tidbits in Disneyland history including Walt and Lillian’s famous 30th anniversary party, how Richard Nixon opened the Monorail, and the name of the Abominable Snowman turning the wheel in the popcorn cart near the Matterhorn (Harold).  But I think my favorite little tidbit was about how Tony Baxter personally raised the price of ice cream.  You’ll have to read it yourself.  In one special chapter, Marcy tells the story of two instrumental people to Disneyland’s culinary delights – Oscar and Indian.  Indian was the nickname for Hideo Aramaki whose long tenure of service included a stint in Club 33 and led him to be executive chef for all of Disneyland until his retirement.  Oscar was the longest serving Disneyland employee and continued to work there as he has since December 29, 1956 until his retirement in September of 2017.  He was well-loved by all and even was Tony Baxter’s lead!  Yes, Tony Baxter the Imagineer who Oscar continues to have a relationship with after all this time.

Marcy even covers the places Walt liked to eat out!  The Tam O’Shanter is one of Walt’s favorites, but so was Smoke Tree Ranch in Palm Springs, Clifton’s Cafeteria in Los Angeles, and Martino’s Original Bakery – all still open today.  She finishes the book with some amazing recipes including two for Walt’s favorite chili.  This book is packed with so much love, you can’t help but feel you know Walt a little bit better after reading it.  If you are a Disney foodie, a Disney buff, a fan of Walt, a theme park connoisseur, or just a person who loves a good read, this book is for you!