Three words to describe the premier hotel at Shanghai Disney Resort. Entering into the lobby, it’s not impressively BIG, but it’s impressively beautiful. Decorated in an Art Deco style, the columns with stained glass at the top near the ceiling are pretty amazing. The centerpiece statue features the big 5 – Mickey, Minnie, Pluto, Donald and Goofy and very well done. The stores are laid out simply and are easy to find with a good selection to whet your appetite, and a nice selection of souvenirs. Not as expansive as some Disney hotel shops, but enough if you forgot to pick something up for a relative you can find it there. The staff is incredibly friendly and helpful and more than willing to assist you. No tipping required here (or anywhere frankly). It’s considered simply part of the service. And very good service it is.

I think this was called the sunrise drink? Non-alcoholic and yummy 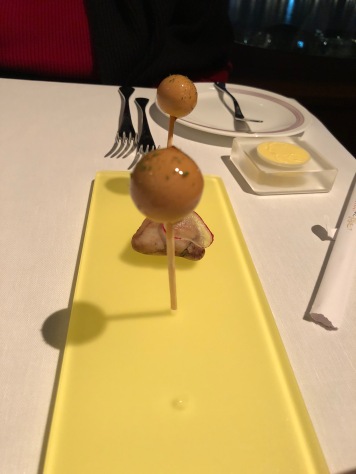 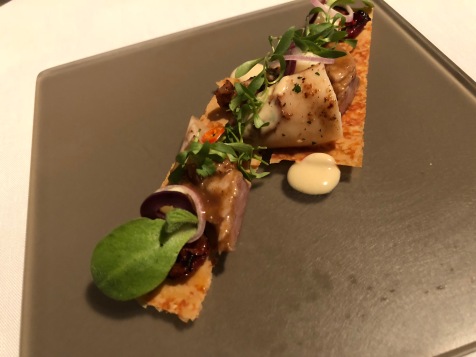 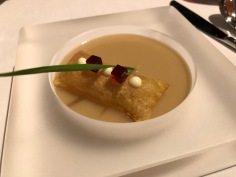 The signature dessert at Aurora – a green tea cake shaped like a peach. Beautiful but not my cup of “tea”

The hotel features what would be considered a 5-star restaurant at the top called Aurora. Advance reservations are definitely recommended. But despite the high price tag (I think it was about $100-150 per person for a prix-fixe menu), it was not particular quiet or romantic. Lots of kids were there even though there wasn’t a price break for children. And the food was only okay. We decided to make this our highlight meal at the park, but it wasn’t as impressive as I thought it would be. However, the service was exceptional. They really go out of their way to make sure you’re catered to. And on top of the restaurant is a viewing area you can access to watch the light show in the park. The music is piped in to the balcony and you can watch the show from a distance and see everything. 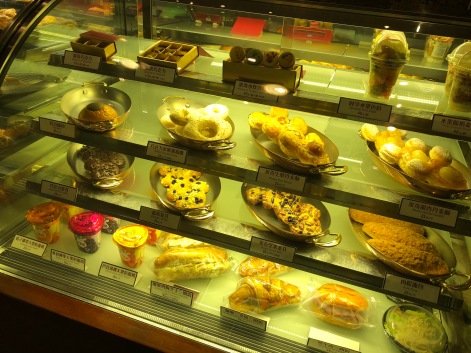 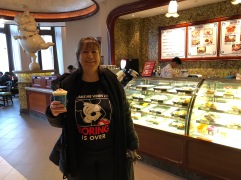 The Ballet Cafe was my favorite as they had simple rice bowl meals to choose from as well as sandwiches, pastries, savory pastries, snacks, coffee, tea, and other goodies. We didn’t eat there, but they did have a lounge serving drinks. It wasn’t large, but never full either. The Bacchus Lounge also featured a special tea service which sounded fun. Both eateries are Fantasia-themed and everything is down the hall from the main lobby so very easy to find.

But you probably want to know about the rooms. Like everything else, they were beautiful, elegant and simple.

Overall Room Impression: Our Toy Story Hotel room was much bigger. But like I said, I think we got lucky there. This room is exactly what you’d expect from one of the high-end Disneyland or WDW premier hotels. Elegantly styled furniture, beautiful headboards, high quality carpets, and a 5-star look. It even has a light up headboard with fireworks and Tinker Bell and a literal Hidden Mickey in the mirror. We could never figure out how to use it though. It worked once and that was it. But so cool.

Beds: Much more comfortable than Toy Story Hotel, but still harder than what you’d get at most other hotels of the same caliber. I have a feeling it’s a cultural thing rather than the company doing things cheaply. Everything about the hotel and room otherwise screams 5-star. The sheets and comforter are definitely high quality as are the pillows. The beds are smaller in general than what you’d typically get in a similar hotel at WDW, but again I think that’s cultural. We encountered the same thing at Tokyo Disneyland. Hong Kong Disneyland however was what we would consider “normal.”

WiFi: The WiFi signal was good and we were able to access it easily. Unfortunately, because of “The Great Wall” (an artificial Internet barrier preventing the use of non-approved websites by the government) we were unable to access certain apps like Instagram, Twitter, and Facebook (which is why I was so silent while we were in Shanghai). Also, we didn’t have access to FaceTime which would have been nice. However, I was able to get email easily and keep up with some (not all) of my games. Basically I copied the description from the Toy Story Hotel post because the WiFi was exactly the same.

Bathroom: Nice and elegant. Not as big as the one we had in Toy Story Hotel, but again, I think we just got lucky there. Very well put together with elegant fixtures and enough space for our stuff. The tub had a head rest which I really appreciated and took full advantage of. I was surprised that they didn’t use Disney themed soap or shampoo. The one they did use looked fancy, but I had never heard of it before. It was high quality though. Very Western (no bidet).

Amenities: Free water! Love the free water. They also have a tea kettle in the room in case you want some warm water (we found out that’s a cultural thing). They do have small toiletries but again not Disney-themed. Toy Story Hotel had more of that. But they did have nice gift bags, pens, and stationary (all free so make sure to take it each day and they will refill it). The refrigerator was nice and big, there was lots of counter space and plugs for all of your stuff, and a nice desk if you wanted to work or blog or something. Personally, my favorite amenity / bed was the hidden trundle bed for kids. If I could fit in it, I probably would have slept there. Like at Aulani and other high-end Disney resort properties, it comes out of the cabinet below the TV and has a beautiful painting of Mickey sleeping behind it.

Park Access: You can take either the bus or the ferry. The bus may come more often, but since we took the ferry each time, I’m not sure. The benefit of taking the ferry is that they escort you to the security line and give you special access. You still have to wait, but at least you don’t have to walk ALL the way around just to get in line. They just help you to bypass some of that. You can also walk if you want. Wishing Star Park leads all the way to the hotel. It’s beautiful but literally a 5K if you walk both ways.

Great hotel, easy access to the park, wonderful rooms, and high quality service. If you’re coming all the way to Shanghai to come to the parks you need to stay on property for the ease and convenience of it all. Unfortunately, there is no early access benefit or special perk for staying on property, but they do let you cut in the security line so at least that’s something. Of the two, I liked them both pretty equally. Want more Disney amenities or just want to save a little money? Stay at Toy Story Hotel. But if you want even higher quality service in an opulent hotel with softer beds, stay at Shanghai Disneyland Hotel. You can’t go wrong with either one.