Tom Angleberger Strikes Back. Tom Angleberger Awakens.  I can keep going, but you get the picture.  Tom Angleberger once again pens a tale of mirth and adventure in The Mighty Chewbacca In The Forest of Fear.  And once again, he does an amazing job.  I’m assuming with the new story structure that this book is considered canon and if so you will love the connections and allusions made in this story.  Since he’s featured on the cover, I’m not giving anything away by saying K2SO plays a major part in this tale.  And a very significant one, too. 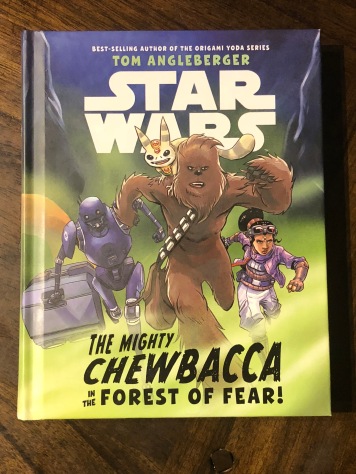 The cover for The Mighty Chewbacca In The Forest of Fear 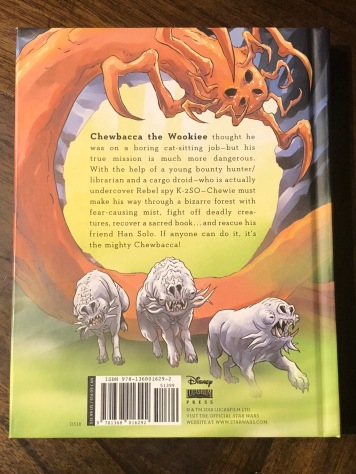 The Mighty Chewbacca In The Forest of Fear is a story focused on Chewie who often takes a backseat role in so many Star Wars tales.  In this one, he is front and center. The story takes place between Solo: A Star Wars Story and Rogue One.  Chewie is tricked into embarking on an adventure without his faithful friend, Han Solo who was captured and being held for ransom until Chewie finishes the mission.  Chewie is paired up with a young librarian / bounty hunter named Mayv and a cargo droid who is really not a cargo droid, but the Rebel spy K2SO working under direct orders of Cassian Andor!  Mayv was coerced like Chewie into accepting the mission, but K2SO is on his own mission.  Together they travel to a strange and mysterious planet strong in the Force where they are sent to retrieve a mysterious item.  Why they were sent, what they were sent for, and who sent them are all central to the story and too much fun to just give away.

In usual Angleberger fashion, the book is told in a creative and engaging storytelling style.  The narrator speaks directly to the reader, often interpreting for Chewie who only speaks in the Wookie language (although I guess if you speak Wookie you won’t need a translator).  It’s funny, at times hilariously so.  It’s action-packed; there are parts it is impossible to put the book down.  And it’s filled with heart as all of Tom’s books are.  Tom’s love of Star Wars shines through in this book as he fills the story with new lore about the Force, about Han and Chewie, and about the Rebellion in a way that is true to the mythology of this universe while giving it a light touch. It is really a very well written Star Wars story that you will enjoy.  In particular, Tom’s version of K2SO is simply hilarious!  At times I was literally laughing out loud.  I’m sure my family wondered what was so funny.