It’s all in the details.

As if I wasn’t already impressed with Disney’s flair for movie magic.  The Art of Disney Costuming does a DEEP dive into the intricacies behind dressing your favorite characters for the movies.  First of all, it is literally a HUGE book, much larger than even most coffee table books.  At about 11″ x 14″, this tome weighs a ton!  But the size isn’t superfluous.  It isn’t big just to be impressive.  It’s big so you can really appreciate the detail that goes into each costume.  From the texture of the material to the fine bead work involved in various pieces, it would be hard to really appreciate the work put into each one without being able to see it properly.

The scope of films covered in the book is as vast as the book is big.  Not only does it cover costumes for Mary Poppins (both the 1964 version and the 2018 version), The Genie from Aladdin (2019), and Belle (2017 live action version of Beauty and the Beast), but also has intriguing coverage of Ben Gates from National Treasure (Nicolas Cage in the 2014 film), Nizam from Prince of Persia: The Sands of Time (I know, right? – 2010), and Dr. Hans Reinhardt from The Black Hole (1979).  Truly a wide variety of costumes, both simple and intricate.  After all, Dr. Reinhardt’s costume was basically a onesie with a lab coat!  They even have Letha’s outfit from Return from Witch Mountain (1978) worn by Bette Davis.

Even from Witch Mountain…

What goes into selecting the fabrics worn by the actors?  Why choose the colors they did?  When do you go simple and when do you dress to impress?  The book covers in-depth all of these types of questions and also the talent behind the costume designs.  It’s fascinating to read about the choices made in the process and how the costumes help to shape the characters as much as the characters shape the costumes.  Jeff does a wonderful Case Study as he calls it with Cinderella, examining her look in the animated feature and then going into the choices made to portray her in different ways from Brandy’s version in Rodgers and Hammerstein’s Cinderella (1997) to Anna Kendrick’s portrayal in Into the Woods (2014) to the classic look of Lily James in the live-action 2015 film and even the elegant and beautiful dress worn by Jessy Schram in the television version of Once Upon A Time. 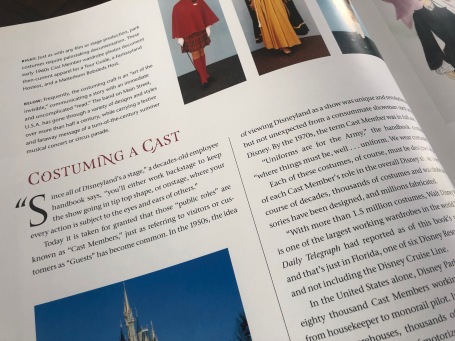 Just wish he had explored this topic more…

Functional yet appropriate for the area – Indiana Jones costumes from Adventureland

Perhaps the only aspect of the book I wish Jeff had expanded on is the costuming that goes into dressing a cast in the Disney theme parks.  The costumes are varied, styled for time and place, and yet super functional.  It would have been neat to do a deep dive into what goes into making one for the parks.  He does cover the topic lightly in the beginning of the book but it’s barely a two-page spread.  Still, it’s hard to complain about Jeff’s work.  He does such a meticulous job, yet still entertaining. If you’re a fan of the Disney films especially or Disney in general, this is a great addition to your Disney library.  And if you’re fascinated with costuming, you’ll want this book for sure!

Thanks to Disney Publishing for providing a copy of this book to me for review.  All thoughts and opinions of the book are my own.  But I highly recommend Jeff’s other books like Maps of the Disney Parks and The Disney Christmas Card.