This is the place to come.  Perhaps the food here would remind Walt of his hometown in Marceline, MO or perhaps it’s the kind of food that any American kid would remember – cheeseburgers, fried chicken, meatloaf, baked potato soup, fried pickles, or apple pie.  They have fountain drinks – the kind you’d find at an old-fashioned malt shop or corner pharmacy – plus a few unique ones to boot.  Classic items like vanilla malts and chocolate-cherry coke stand beside PB&J soda and lemonade topped with citrus foam.  And even though it’s called Carnation Cafe, there is no Carnation brand ice cream being served in this place.

But don’t worry, in a way it still exists.  Dreyer is now the official ice cream found in the park.  Dreyer is the name brand ice cream produced by the Nestle company and Nestle acquired Carnation back in 1985.  So even if the Carnation name doesn’t exist on a tub of ice cream, in a round about way it’s still being served in the park.  Plus on every table, they put a carnation in a vase.  Just another homage to Disney’s rich past. The newest incarnation of the Carnation Cafe was introduced after some major renovations on Main Street which saw many shops moving around into different spots.  Carnation Cafe opened back in 2012 and currently serves what the website calls “homey diner fare.” 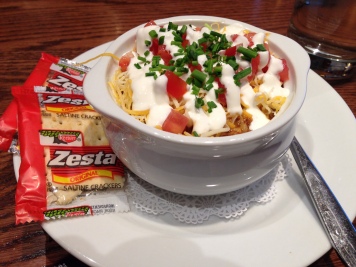 Indeed the menu is filled with American classics.  Again, as has been the case with Disney’s surge into better dining, this place while a bit pricey compared to what you might find outside the walls of the park, is very reasonable for the quality of food and amount that you get.  The meatloaf is a very large portion!  A friend of mine ordered it and said not only was it good for a theme park, but that he would honestly come back just for the meatloaf – it was that good.  I had the chicken fried chicken and while tasty, it wasn’t as hearty or as big as the meatloaf.  The portion was a little small, but what I was super impressed with was the chili.  It was quite possibly the best I’d eaten.  If this was really Walt’s favorite, then it’s no wonder.  It’s filling, hearty, meaty, and good.  I wasn’t brave enough to try the PB&J soda, but it was quite impressive that they did have such a neat variety on their menu.  They have burgers, pasta, salad, fish, soup, and desserts.  When we went they had lemon meringue pie and apple pie as well as ice cream by the scoop.  But we were too full to eat any more.

Lemonade with a citrus foam 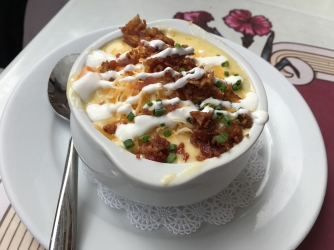 If you want to try classic American fare, then come to the Carnation Cafe and you won’t be disappointed.  They have some terrific food to eat in a nice, sit-down atmosphere where the service is friendly.  The decor is reminiscent of turn of the last century Main Street with the stained glass hanging lamps.  And you won’t go away hungry.  Bring your family.  And call in advance for reservations if you want to make sure of getting a quick seat (but usually you can find a seat fairly quickly in this place).  Have a great meal!