I found myself in awe as I walked the “red” carpet for the opening of Million Dollar Arm.  It was simply surreal to have the flash of dozens of reporters and the lights of the camera crews shine in our direction as we passed by the stars of the film who graciously talked to the press. Representing Babble.com, I had the chance to join a group of other bloggers who were there to find out more about this inspiring film, but it was like walking on a cloud.  We had earlier interviewed the stars and their real life counterparts about the movie and suddenly we were there at the premiere. 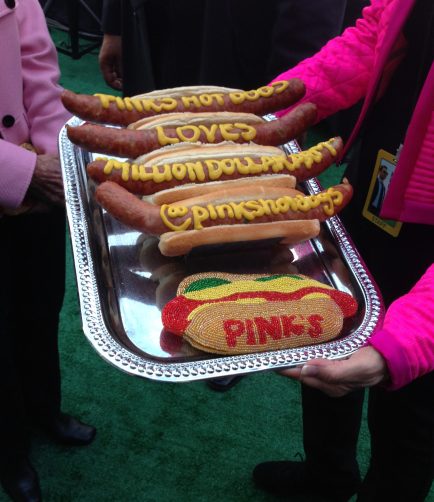 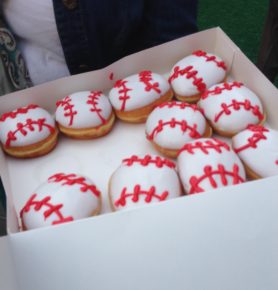 Weird to be on this side of the ropes

As we were walking toward the theater on the green Astroturf that served as the red carpet, JB Bernstein came up to us and took a selfie with our group!  The real life person behind the character in the film took time away from the press and the limelight to make all of us feel special which only made the night even more incredible. The actors who portrayed Rinku and Dinesh in the film (Suraj Sharma and Madhur Mittal) turned away from the cameras and waved “hi” to us as we passed by. We were treated like royalty by everyone involved. From the baseball-themed donuts to the delicious made-to-order Pink’s Hot Dogs, the food was fun and delicious. It was weird standing in line for a hot dog with Adam Arkin standing in line with me. Sitting down in our seats, we were right in front of Pitobash who played the charming and funny Amit in the movie. The whole experience was like a dream come true.

It seemed somehow fitting since this film is about the same thing. Million Dollar Arm is an touching movie about hope, love, and dreams.  JB Bernstein is a sports agent (portrayed by Jon Hamm) trying to make it on his own and having an incredibly difficult time. He comes up with an idea to break open the baseball market in India by hosting a reality contest called “Million Dollar Arm.” The winner has a chance to win a cash prize and the top two would come to America for an opportunity to sign with a major league baseball team.

He discovers two talented boys, Rinku Singh and Dinesh Patel, neither of whom have ever picked up a baseball. But the prospect of winning this kind of money could change not only their lives but the lives of their families forever. Competing against 38,000 other contenders, the boys come out on top and head to America for a chance to chase their dream. They have to not only face the daunting task of becoming ready for major league baseball, but adjust to a completely foreign environment.  It is a heartwarming story that will be sure to inspire everyone who sees it.