Captain America: Civil War is coming home to Blu-Ray on September 13 with a boat load of promising features.  In addition to the number one box office movie of the year (so far), the introduction of Black Panther, the premiere of Spider-Man, and the surprise of Giant-Man (aka Ant Man all grown up), there is even more.  The home release includes the requisite deleted scenes and audio commentary, but it also has a gag reel, an in-depth two part “making of” feature, the evolution of both Captain America and Iron Man in the Marvel Cinematic Universe, and for those Doctor Strange fans out there an exclusive sneak peek at the upcoming film. 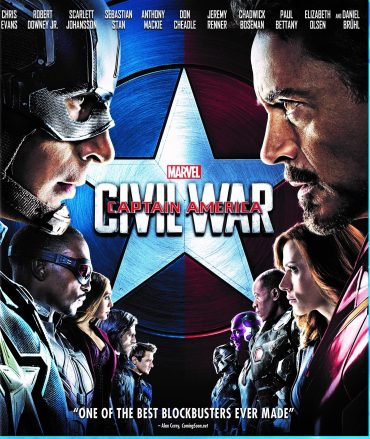 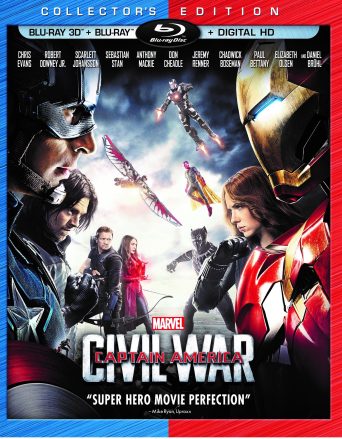 The “making of” feature (entitled “United We Stand, Divided We Fall”) comes in two parts – I think just so you can take a break and come back to it later.  It’s probably the best feature on the disc.  Each character and their part in the overall story of the Marvel Cinematic Universe (MCU) is explored and how their involvement led them to this place.  Included in these stories are clips, outtakes, and behind-the-scenes views that add depth to the movie and give you a sense of the characters’ place in history.  Very well made and produced, “United We Stand, Divided We Fall” is essential viewing for Marvel fans everywhere.

The two “Road to Civil War” featurettes trace how both Captain America and Iron Man became the men who embodied opposite sides of the Sokovia Accords.  It’s a look back at the history of both characters and includes footage of the other MCU movies each was involved in and how their characters evolved.  For someone not familiar with either character, it’s a good summary.  For a fan who has seen all the movies, it’s fascinating to see how the development of each character has been threaded through so many different movies to land each one at this place and time.  It’s simply genius.

There weren’t many deleted scenes, only four.  More than anything these scenes added flavor to an already complete story, but were interesting to watch.  The gag reel was short but enjoyable.  And the audio commentary was fascinating to listen to.  In it we hear more about the relationship between Cap and Sharon Carter (she’s Peggy’s GREAT niece – not just her niece), about Tom’s introduction as Spider-Man (and how natural Robert Downey, Jr. interacted with the young man taking on this prominent role), and a bunch of great insight into the filming and making of the movie.  The only downside to the commentary was they had so many stories to tell it was like watching a silent movie version of the film.  It would have been great to allow some of the dialogue to be heard (especially the funnier bits).

Being a huge fan of Doctor Strange, I LOVED the exclusive sneak peek at the upcoming movie.  I know eventually all of this will be made available to the public via YouTube or some other medium, but wow.  This looks like it will be an even better movie than I thought.  The way they integrate not only the Ancient One but Wong and Mordo into the film is going to be great!  And if you don’t know who those people are yet – you will.

It’s hard to believe with over a billion dollars in box office totals anyone hasn’t seen this movie, but if you haven’t, now’s the time.  And even if you have seen it multiple times it is well worth adding to your collection.