Dinner at Remy is both romantic and magical.

There is nothing like a Disney Cruise for family fun, but it’s also a great way to spend some quality time together as a couple (whether you have kids or not) and dinner at Remy certainly fits the bill.  We had previously done the champagne brunch and while they are both culinary delights, there is something more romantic, intimate, and exciting about dinner at Remy. It is more expensive than the brunch, but if you are looking for a five-star experience in a romantic setting with a quiet atmosphere, you will find it is worth every penny and then some. 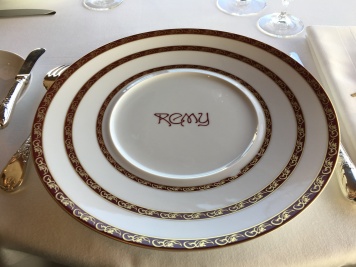 There are different ways to order a meal at Remy for dinner.  Either choosing the a la carte option or one of two prix fixe menus each one created by a renowned chef – the French menu by Chef Lallement who designed the menu for a 3-star Michelin restaurant and Chef Hunnel, ranked the 2nd best chef in all of the United States.  Since there were two of us and they both sounded delicious, my wife and I each ordered one of the prix fixe selections and just shared our dishes together.  Besides, it’s more romantic that way.

Even though it was supposed to be a five course dining experience, it was actually much more.  We started with an amuse-bouche of soup in one perfect bite sized morsel.  It was like a French version of xiao long bao and just incredible.  By the way, they also made it gluten-free for Cassie.  Then we moved on to a beautiful soup with so many different components I honestly forgot.  But it was creamy and tasty without being too heavy.  And only then did we get our first course.  Both were crab dishes, but Cassie’s was served on a bed of seedless watermelon with an edible flower garnish and mine was served in a light warm broth with a crostini also peppered with more crab and edible flower garnish.  Both were delicious and while Cassie’s won for creativity, I liked mine better.

The next course was more hearty but still light enough on the tummy.  Cassie had sea bass in this wonderful tasting broth topped with garden fresh vegetables cooked perfectly.  Mine was a beef tartare plate which included a carpaccio ravioli.  So cool!  This dish was close and I think we each liked the other one better, but mine won for creativity this time.  The third course was probably my favorite of the five.  Cassie had this perfectly tender lamb from a ranch in Colorado and it was served with a gruyere foam surrounded by a consomme used in French onion soup!  SO good. Mine was a perfectly cooked lobster served two ways – surrounded by lobster bisque on a plate with spring vegetables and lobster claw meat in a broth.  While both were excellent, I had to go with Cassie’s dish for the pure abundance of flavor.

Our fourth course was a heavier meat course – Cassie getting a kobe style beef with root veggies and mine a veal tenderloin with parsnips.  Again both delicious, but Cassie’s was more tender and flavorful.  So far, the score is 2-2 with only the dessert course coming up.  But wait!  They had a special treat – Miyazaki beef.  Miyazaki beef is difficult to get outside of Japan and even in Japan its very rare – the best of the best of all steak raised there.  If you’ve heard of Wagyu beef, only half of all Wagyu beef is good enough to be rated as Miyazaki beef.  The cost was $55 for a 2 oz portion and $110 for a 4 oz portion.  We opted for the 2 oz portion since we were already having an entire meal, but one bite of the steak and it was literally the best either of us ever had.  I savored every last bite.  And we still had dessert.

Believe it or not, there were actually OTHER surprises during the course of the meal, but I want to leave something for you to look forward to.  And for those who are gluten-free, they were able to make every dish on the prix fixe menu without gluten.  My wife Cassie is gluten sensitive and they added a couple of surprises that were also gluten-free for her.  Overall, it was a wonderful night with delicious tastes that you must try when on board the Disney Fantasy or Dream.