What kind of bars do they have at Disneyland?

For the longest time there was no alcohol available at Disneyland, but even so there were still two bars you could go to that served drinks to quench your thirst.  Mighty good ones, too.  Those bars are still open everyday at the park and still serve up refreshing and tasty liquid gold – the Tiki Juice Bar and Mint Julep Bar.  Two must stop places for any true foodie – or anyone who just likes tasty drinks. 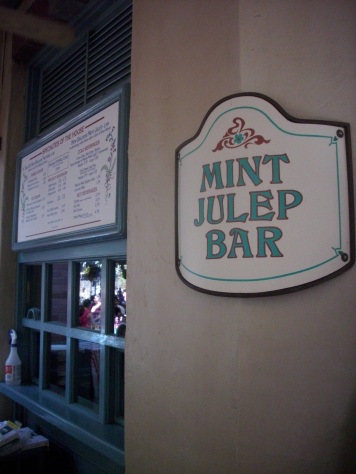 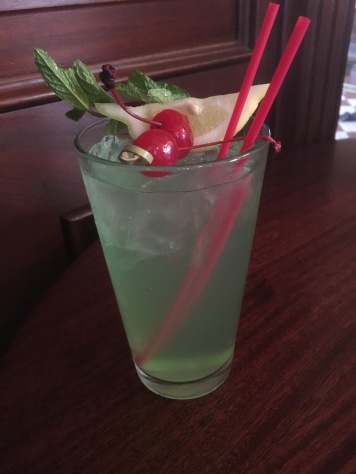 The Mint Julep Bar is one of my favorite places to take people.  When I bring my churches to Disneyland, we always stop at this hidden gem in the back of the French Market.  A completely separate stand from the restaurant, it’s really just a hole in the wall (literally a hole in the wall).  But in this hole, they have one of the tastiest, unique, non-alcoholic drinks in the Park – the Mint Julep.  Not being much of a drinker, I can only tell you that it tastes like a mint julep without the alcohol.  The sweet fruity taste is not overwhelming as to be coyingly sweet.  In fact, it’s more of a subtle taste with a sprig of mint on a fancy sword which also spears a lime wedge and a Maraschino cherry.  There are other things to drink here as well, but it’s not called Mint Julep Bar for nothing.  They also serve Mickey-shaped beignets.  Honestly not as tasty as the powdered sugar laden treats at Ralph Brennan’s in Downtown Disney (save that for another article), but good nonetheless and where else are you going to find Mickey-shaped beignets?  Definitely worth a taste.

Located at the entrance to the Enchanted Tiki Room, this stand sponsored by Dole and featuring Dole Pineapple Juice is also the home to the famous Dole Whip.  Not a drink, you can get this tasty, non-dairy treat in the form of what amounts to a root beer float – except with Dole Whip and Pineapple Juice (with a cute umbrella and a Maraschino cherry) – called a Dole Whip Float.  But what is a Dole Whip?  A Dole Whip is a tasty frozen treat, much like soft-serve ice cream except with pineapple.  It’s technically non-dairy, but multiple web sites have said it has a milk derivative called sodium caseinate.  None the less, it’s definitely not ice cream.  It tastes more like a pineapple sorbet, but with an even more intense pineapple flavor.  If you like pineapple, this is the ultimate treat for you.  There is almost ALWAYS a line and a pretty long one at that for this awesome frozen delicacy.  You can also get pineapple spears and pineapple juice at the stand – both tasty, but for me the ultimate treat is the Dole Whip Float.  You get the best of both worlds – pineapple juice covered with pineapple Dole Whip and covered with a cute umbrella and cherry.  Yummy!

Now, in all fairness you might say there was at one time three bars in Disneyland.  There used to be the Mile Long Bar in what was then called Bear Country which DID serve drinks (and the tastiest and BIGGEST dill pickles this side of the Mississippi), but it didn’t have the distinctiveness of either of these other two watering holes.  Today, that place has gone the way of other bygone favorites like the Teddy Barra’s Swinging Arcade, and has been replaced by Pooh Corner (specifically the Mile Long Bar is where the bakery and sweet shop is in Pooh Corner).  If you’re hankering for something to quench your thirst, saddle up to the bar and try one of these tasty treats.  Cheers!

5 thoughts on “Saddle Up to the Bar(s) at Disneyland! – Disney Foodie Spotlight”