It’s time to bring it all home…

Season 4 for Star Wars Rebels is about to begin.  October 16th marks the first episode of the final season for this landmark show that has introduced us to new characters and the origin stories of beloved ones.  But if you’re like me and you are just itching for some Rebels action before the beginning of the end, you MUST pick up the Blu-Ray version of Star Wars Rebels: Season 3.  Included among the bonus features are insights and sneak peeks into the upcoming Season 4! 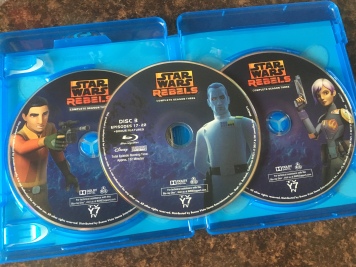 Both the DVD and Blu-Ray versions contain “A Rebel Alliance” which shares about the perspective Executive Producer, Dave Filoni and the Star Wars Story Team had when envisioning the development of the Rebel Alliance.  What’s even more special is how they tie in the Rebels story to Rogue One and the other Star Wars films.  One of the hammerhead ships that Ezra, Zeb, and Sabine steal from Princess Leia in Season 2 are then shown in the film Rogue One ramming the Star Destroyer and allowing the mission on Scarif to succeed.  The Y-wings that The Ghost crew steal from the shipyards are part of the fleet that battles the Imperials over Scarif and we can probably safely assume over the original Death Star.  Those are the kind of connections this feature reveals and goes in depth with Mon Mothma and how it was in Star Wars Rebels where the Rebellion becomes officially formed under her leadership.  Hal Hickel, Animation Supervisor with ILM mentioned how The Ghost was used in Rogue One in a loose enough way for Dave to be able to insert a Rogue One story about The Ghost and her crew in Rebels continuity. “A Rebel Alliance” is chock full of good stuff with lots of hints where Season 4 might be headed.

The same can be said of the great Blu-Ray only features, too! “Return To Mandalore” explores what led up to Sabine gaining control of the Darksaber and how Mandalore wasn’t originally on Dave’s radar.  Dave explains in more detail about how the subplot of Sabine and her family came to be.  But now with Sabine having left the crew of The Ghost to serve the Mandalorian people and with the addition of Bo-Katan leads to some new and interesting story lines. Scenes from Season 4 are flashed briefly on screen to tease you about what’s to come.

“Thrawn: A Legend Reborn” is about the development of Thrawn as a new kind of villain in the Star Wars universe.  Dave mentions he is the only featured villain to be in more than one season.  And this feature explores how he was brought to life and made canon in the current Star Wars Universe.  Star Wars fans will thrill to see Timothy Zahn, Thrawn’s creator, coming in to consult with the Star Wars Rebels production crew and the details that have to be thought about when bringing him to the screen.  There are also snippets of scenes from the upcoming Season 4 featuring Thrawn that will make you wonder what happens to everyone’s favorite Chiss.

My favorite was “Apprentices to Outcasts: Kenobi and Maul.”  This feature had snippets from the films, the Clone Wars, and Rebels and ties together all the story lines that led them from that fateful battle on Naboo all the way until the third season of Rebels.  It also had storyboards, interviews with the voice actos, insights from Dave and the Story Team, and a really intense breakdown of the final duel.  Seeing the evolution of Obi Wan both in look and in battle style will make Star Wars fans impressed at the level of thought that goes into such decisions.

The Blu-Ray also features an extended version of “The Original Rebel: Saw Gerrera Returns” that was released earlier this year.  It has five audio commentaries on key episodes.  And both the Blu-Ray and DVD versions have every episode of Rebels Recon, the YouTube show dedicated to everything Star Wars Rebels. Featuring more features than ever before, this Blu-Ray MIGHT sate your Rebels appetite as you are waiting for Season 4 to begin.  Definitely worth putting in your collection!