A friend once told me that a good blog post should be between 400 and 700 words.  Can you just use one word 400 times?  If so, I’d use the word “beautiful” to describe Jeff Kurtii’s The Art of Mulan.  It is simply a gorgeous book.  Of course, there are plenty of stills from the film itself which in themselves are works of art.  But it’s the production artwork, much of it done by Chen-Yi Chang, that capture your eye and imagination.  Originally released in 1998, this new edition includes stills not included in the first release with a new introduction and a few words by Jeff himself.

If you haven’t seen this book before and you’re a Mulan fan, you’ll need this in your collection.  It is filled with gorgeous paintings and drawings along with animation from the film.  But more than that, it has stories about how this fan favorite was made, the directions it might have gone, and how they arrived at the final product you see on the screen.  For instance, did you know Mulan was going to originally be a rom-com like Tootsie?  Yes, I’m glad they didn’t go that way, too.  Then they thought of going full rebel, but found that story to be too militant and with little empathy for Mulan herself.  In the end, they stuck to the original legend, downplayed the romantic aspects of the film, and focused on creating a story full of heart and passion.  What they ended up with was a Disney legend. 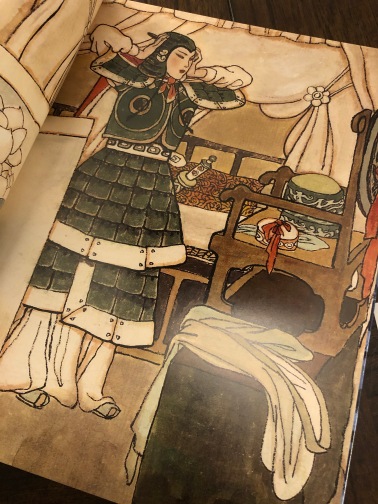 Early concept drawing of the big baddie in Mulan

Such a beautiful and peaceful image

Included in the book, along with all of the stories and beautiful art, is the original “Legend of Mulan.”  A short poem but one rich in visual imagery, it is clear how this was the heart of the film.  It was interesting to read about the legend of Mulan and how in many ways she is a lot like King Arthur – blurring the line between reality and myth.  Was she real or simply a story?  Many claim she existed, but what isn’t clear is when, where, or who she was.  There are three different claims on her family name alone.  Some know her as “Zhu;” others as “Wei;” and perhaps most commonly she is known as “Hua” or “Fa Mulan.”  But the discrepancies don’t discount her existence.  Rather they go to enforce how beloved she is by so many.  Everyone wants to claim Mulan for themselves.

Seriously, it’s hard to describe how gorgeous the artwork is in this book.  The pictures don’t do it justice.  You’ve got to see a copy for yourself to truly appreciate it.  But more than that, it’s a fascinating tale of the making of this film.  And what will be appealing to die hard fans of the animated classic is that there isn’t anything outside of a mention of the live action film in the Introduction anywhere in the book.  All the characters you’ve grown to love are included, including Mushu, Shan Yu, and of course Li Shang.  Get this treasured book today!