Beatrice Zinker, Upside Down Thinker is a winner of a book!

And that’s due to a winner of an author in Shelley Johannes. Shelley is just about the nicest person you could meet – and we haven’t even met in person yet. But talking to her you can tell she is genuine, kind, and passionate about her work. Beatrice is an extension of herself in many ways, but she is also the person she hopes every child can look to as a source of confidence in their own lives. Like Beatrice, she loves black turtlenecks. There’s just something comforting about them. But unlike Beatrice, she doesn’t go on any secret ninja missions. At least not yet.

In her online bio (which I highly encourage you to read), she mentions a love of libraries. Not only were they a great source of reading for her as she prepared to write her own book, but it was a place where she gained inspiration and confidence as Beatrice slowly came to life. “We’d meet every Tuesday at 10am, there was a group of us, all of us were moms with young children and we’d go there to meet up and catch up on life. It was with them that I first shared Beatrice and got their feedback about her and where the story was going to go.” 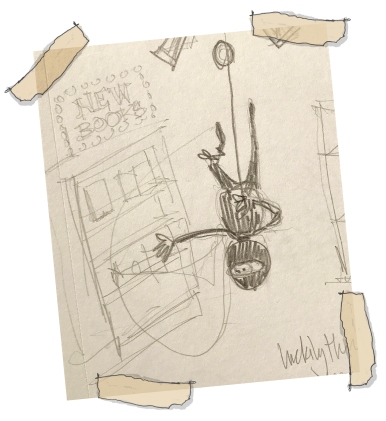 Early concept art for Beatrice as she was being developed

Shelley loves books and has read a ton! When she decided she wanted to be an author she devoured them. Some she gained inspiration from (“Oh, I wish I could write that good!”) and others she gained motivation from (“I think I could do that!”). She just kept reading and reading. But the one that inspired her the most was Extra Yarn. It was about a little girl named Annabelle who had a magic box of yarn. Annabelle knit sweaters for herself and her dog and despite being laughed at, ridiculed, and told she couldn’t do it, Annabelle did. “I liked that she had such self-confidence. She didn’t care what people said. She just did it. She taught me it’s how you choose to face life that matters.”

I asked her about the name “Beatrice.” What inspired her to use that name in particular? “I wanted her name to be timeless. The girl in the book Extra Yarn was named Annabelle and I was looking for a name like that. Something that will last. It’s funny because we live in a small neighborhood and the third street down from us is called ‘Beatrice.’ I had picked the name long before I noticed that, but it was a funny coincidence. Originally, when it was still a picture book, she didn’t have a name. When I later had to come up with a full name, Beatrice Zinker was the one that sounded right.”

In the book Beatrice Zinker, Upside Down Thinker, Beatrice talks about a secret plan with Lenny (her best friend). And it wasn’t until the very end that readers find out what that secret plan is. I told her Shelley she did a great job of hiding the secret plan and she told me, “In the first rough draft of the book, I didn’t even know what her big plan was. It finished with an ending, but without revealing the secret plan. As we worked on the next draft, I needed to figure it out. I liked that it was a secret for me to figure out, just like it was for the reader. At first I thought the idea might be a bit too cheesy, for lack of a better word. But the more I thought about it, the more sure I was it was the right plan. Thinking of all those kids who might actually emulate that plan for themselves made me sure it was the right way to go.”

Mrs. Jenkins is a relatively minor character in the book, but one who plays an important part in Beatrice’s life. Shelley promised we’d see more of her in the future. “She pops up at the beginning,” Shelley shared, “and I love her, so I was really excited when my editor suggested it would be nice to see her come back around at the end. She plays an important role in Beatrice’s life and it just made me think about how we can never know how much of an impact someone will make in your life. I go to Starbucks in my local Target every morning to write and as I’ve gotten to know them and they’ve gotten to know me, there’s three of them in particular – one older person and two younger ones – who just mean the world to me. They are some of the most important people in my life and here I am just some average girl writing at Starbucks.” Shelley is anything BUT average, though. Don’t let her fool you.

She mentioned hearing more about Mrs. Jenkins in the future so I asked if we’d see more of Beatrice. The short answer is a joyful, “Yes!” “When I signed the book deal with Disney it was for three books and we’re pretty far along in the second one now. I would love to play in Beatrice’s world for as long as possible though so hopefully we’ll see a lot more of her!” Shelley would love to make a picture book someday, and if she does, I’m sure it’ll have as much heart as Beatrice Zinker, Upside Down Thinker! Can’t wait.