That’s one of the things you can’t judge before the first show on DWTS.  It’s also what makes a critical difference determining winners and losers.  I can’t think of a mirrorball trophy winner that didn’t have great chemistry between pro and celebrity.  It’s not the only factor, but it’s important and it might just be the intangible something that sends the next winner over the top.  This season is turning out to be interesting.  There are a few couples at the top and then a slew in the middle – any of whom can find their way to the Final Four.  Unlike some seasons, no one is really bad and so far no one is beyond reach.  But a few are close.

As we are coming up on the last chance to lock in your mirrorball champion pick, here is some of my analysis of the season so far:

Currently on the Bottom:

The great thing about DWTS is that you don’t need to be the best EVERY week.  You just need to be ahead of the next guy.  We haven’t gotten far enough in to know which stars are being saved by their fan votes and which ones are winning on their merits.  Sometimes fan votes save people completely undeserving (IMHO) but almost always the winner has real dancing talent.  That being said, only three of the couples are on “the bottom” but any of them could improve enough to work their way up: Terrell and Cheryl, Nick and Peta, Derek and Sharna.

Middle of the Pack:

This was the hardest.  All have potential.  All could improve enough to make it to the finals.  But they could all easily drop off, too.  Sasha and Gleb keep getting good scores above what I think they should get.  I don’t know about Sasha’s star power either – if it’s enough to make it to the finals.  And she and Gleb don’t have on-screen chemistry.  I love Nikki!  I keep hoping she makes it and she has a lot of power and grace, but she isn’t connecting to the judges as well as some of the others.  And although she is gorgeous, I’m not sure she has the fan base either.  Still, she and Artem make a good couple and have had some great dances.  Drew and Emma have improved literally every week and Drew seems to be getting the hang of it.  That’s exactly what the judges love and Drew has a very big fan base.

Biting at the Heels:

These contestants are so close to making it into the Final Four!  Any of them have the potential to make it.  They could even win it all.  Victoria is one of my favs.  She just has such a great energy about her and her partnership with Val is just awesome.  Her story is touching and she has a ton of charisma.  But the judges keep giving her criticism over things I’m just not seeing.  It’s the only thing holding her from the top – and I’m not sure what her fan base is like.  Vanessa and Max have rocketed to the top group and she DEFINITELY has talent, but if rumors are true about their lack of chemistry that could spell doom for the couple.  They won’t be dropped any time soon so no worries there.  If they can fix those chemistry problems before the final weeks, they could definitely be in the top three if not top two.  If not… Frankie and Witney are ready to take their place.  I love Frankie’s spunk and he really has more dance talent than I originally gave him credit for.  It all depends on his back.  If it can hold out, so can he.  Could be top four if not higher, but it will be hard to upset the top two. 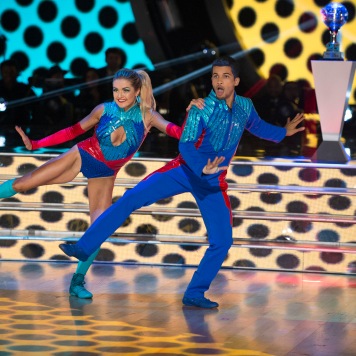 Cream of the Crop:

The two Lindseys dominate the season.  Lindsey Sterling, famed violinist and apparently awesome dancer paired with Mark Ballas have come out strong and Mark’s creativity is really a match for her taste.  Doing one of the most creative dances of the season, Lindsey really swept everyone off their feet.  Lindsay Arnold and Jordan Fisher are pure talent.  Jordan is so amazing to watch, he’s already at week 8 when everyone else is still at week 3.  Their super hero dance was fluid and fun and it’s obvious he already deserves to be in the finals.  Will he win?  That is still in question – but he’s MY choice for mirrorball champion!

Who will you pick as mirrorball champion for the season?