The country and the world embraced Black Panther in a way few expected, but given the high quality of directing, acting, and story – not to mention amazing visual effects – it deserved all the attention it received.  Will the Academy see it that way?  One can hope that for the many ways it was groundbreaking it would, but the Academy is extremely short-sighted when it comes to action films.  Still it was heartening for me to see this film with one of my favorite Marvel characters and a cast starring people of color make it’s way to the top of the domestic box office for the year.  Worldwide, Avengers: Infinity War topped the list with a strong overseas showing.  This wasn’t a huge surprise considering how popular the Marvel Cinematic Universe (MCU) is.

Also not surprising is the strong showing of Incredibles 2.  With a strong story, beloved characters, and culturally appropriate issues (moms being the breadwinner / dads helping to raise the kids), this film zoomed to number 4 worldwide and 15th among all films EVER!  Ant-Man and the Wasp held its own, coming in stronger than the first film and ninth overall for the year.  And Solo despite its problems and troubled history, was still the fifth highest grossing Disney film worldwide, although disappointing among Star Wars films.  Despite being shown in nearly four times as many theaters, it was still the second worst live action Star Wars film ever, only beating out The Empire Strikes Back which was only in 1,278 theaters compared to Solo‘s 4,381. (Stats thanks to Box Office Mojo).  Mary Poppins Returns having only just come out, it’s hard to know where it will land.  It very well could upset Solo and push it down from number five or even top Ant-Man and the Wasp, but with no information, it’s hard to know. 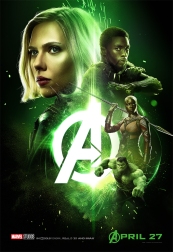 TAKING THE WHEEL — In “Incredibles 2,” Helen aka Elastigirl is called on to help bring Supers back. Her mission comes with a brand-new Elasticycle, a state-of-the-art cycle that is designed just for her. Meanwhile, Bob navigates the day-to-day heroics of “normal” life at home. Featuring the voices of Holly Hunter and Craig T. Nelson, DisneyPixar’s “Incredibles 2” busts into theaters on June 15, 2018. ©2018 DisneyPixar. All Rights Reserved.

Here is how the year stacked up to my predictions with my guesses on the left.

What will 2019 look like?  Unless there is a particularly large showing for Artemis Fowl (not likely although I do want to see it), the top 5 will probably be easy to predict.  The hard part will be where they land in the mix.  Dumbo isn’t likely to crack the top 5 despite the nostalgia for Disney films.  Considering that Tim Burton’s weird and dark takes on almost everything he does seems contradictory to a family film like Dumbo and there are not one, but TWO other live-action remakes coming out of the Disney stable it seems like a long shot – especially with star talent like Will Smith (Aladdin) and Beyonce (The Lion King) heading the mix.  And with TWO powerful MCU films coming out including the first to headline a female lead (Captain Marvel) and the culmination of the Avengers films (Avengers: Endgame) it’s hard to see where Dumbo will land (pun intended).

What are your predictions for the coming year?  Share it with us here on Disney Nerds!