There are many ways to trade and collect pins.  You can, of course, trade with cast members in the parks or with fellow pin traders at both the parks and events.  You can wait in line at the Disney Studio Store in Hollywood on a pin release day (which can be SO frustrating but also equally rewarding).  You can visit other Disney locations far and wide (like Aulani and the Disney Cruise).  But my favorite place to get AND trade pins are the special events Disney has from time to time.  You can find these events at the Disney Studio Store Hollywood (beyond the regular pin releases), D23 Expo, and at theme park special events.  They don’t do them as frequently as they used to, but when they do, be sure to go! 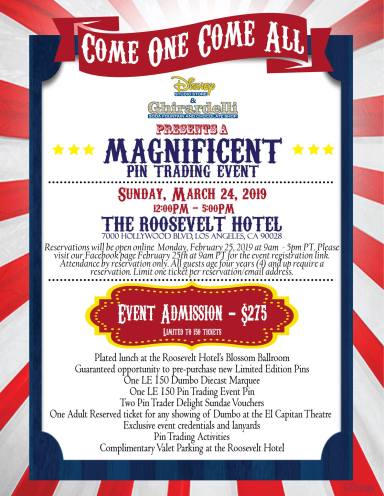 I love the Disney Studio Store Hollywood events.  They are well organized and you are pretty much guaranteed any pin you want.  But you pay dearly for that privilege.  The last event DSSH hosted was the Magnificent Pin Event featuring Dumbo at the Roosevelt Hotel (just down the street from the DSSH store).  Cost? $275!  And that’s for the CHANCE to buy MORE pins!  To be fair, a lot comes with the price of admission including two different LE 150 pins, a voucher for 2 Pin Trader Delight Sundaes (each about $15), a commemorative lanyard, and a plated lunch. Not to mention they likely have pin boards or some other fun pin trading opportunities.  But still…$275?  It’s the price you pay for this kind of exclusivity – and they still sell out! 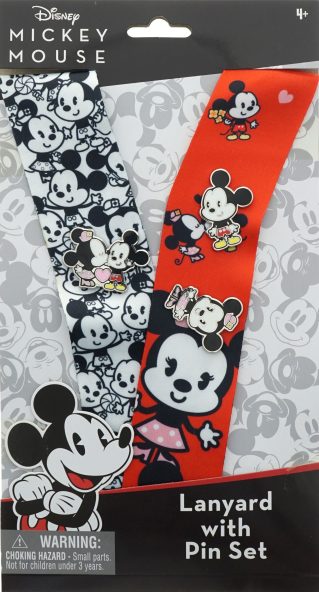 D23 used to have dedicated pin trading and pin collecting events all the time.  Often they were at Walt Disney Imagineering, but they would also have them on the Studios lot from time to time.  Pretty much these are gone now (sadness), but you can still get some amazing pins at D23 Expo.  Not much trading action the past few times I’ve been, but more pins than you can shake a stick at!  Not only does Imagineering bring their whole store down to the Expo (including WDI only pins), but the Disney Dream Store has exclusive and often limited edition pins, as does the Disney Store itself.  That doesn’t include pins released by Disney licensed vendors – some of which are also LE in low quantities!  If you’re a pin collector, you need to be D23 Expo, but be prepared to wait in VERY long lines.

An overview of the pins available at the exclusive pin event for Enchanted Tiki Room. Often exclusive pins are now wrapped into bigger events that encompass many favorite Disney collecting passions

The commemorative gift given at the Sci-Fi Academy event

Perhaps my favorite are the theme park events.  Always well done, they do the best job of incorporating merchandise together with the things you love about the parks.  Most recently they threw a huge party for the 50th anniversary of the Haunted Mansion, and while the price tag was steep ($300) it seemed to be well worth it!  Not only was their exclusive merchandise to be had (including some very cool pins), but the ride had some added “fear-tures” only for those two nights.  As the price has gone up so have the exclusives.  When the Enchanted Tiki Room turned 50, we had the opportunity to purchase limited merchandise prior to the event but they also had pin auctions, pin boards, and artist signings.  It doesn’t look like the Haunted Mansion event had those particular features, but different ones.  Instead of a focus on pins, it was more of an overall event.

Disney is still the master at merchandise and does a very good job of putting together an event that is beautifully put together.  If you can afford it, these types of events are your best bet to get exclusive, rare pins of your favorite characters, attractions, or themes.