What an absolute nightmare!

Line management was again at the heart of the problem for D23 Expo.  You’d think after four other conventions, they would have refined the art, but alas it was as if this year they had someone in charge who had never done it before.  In years past, they guided people into the Expo almost literally one by one.  And while it took significantly longer, there were no safety issues.  This time there were plenty.  The first two days they decided to do a “rope drop” meaning they opened all the doors at once and let people flood in.  Did they really think telling people to “slow down” was going to work?  It didn’t.  Everyone flooded to one of the four main stores selling hard-to-find items – Disney Dream Store, Disney Studio Store Hollywood (DSSH), Disney Store, and Mickey’s of Glendale (MOG – the Imagineering store).  People were getting crushed, trampled, and almost came to blows.  You would have thought they were giving out penicillin instead of pins.

REALITY CHECK: My friend John said it best, “This is a First World problem.”  When we are about to lose it over a bunch of pins (or dolls or whatever), you have to put it all into perspective.  Other countries have people waiting in line for things like water, food, and medicine. Take a step back and chill out people.

Second, why do three of the four stores not learn a lesson from the Disney Dream Store?  Disney Dream Store runs a smooth and efficient operation.  And while they do run out of some of the extremely limited items, they make enough of most things that people don’t feel cheated.  Plus, they have something like 40 registers to help you so the wait time in line 15-20 minutes most of the time.  And their Cast Members know what they are talking about and genuinely want to help you out.  I’m not sure why, but DSSH operated as if they were still in their little store in Hollywood, offering Limited Edition pins only numbering up to 300.  So of course everyone came flooding in, even though the per pin price was about $10 more than what it normally is at the store.  Same with MOG.  Their pins were LE 300 or less and since they rarely grant access to the public did they not know after this many Expos under their belt this would happen?  And Disney Store – come on.  An eternal nightmare.  Being an avid pin collector myself, I just gave up after the first day.  I spent all of my morning getting pins from DSSH on Friday while my buddy John spent his time at MOG.  At least I got pins.  He waited in line for literally three hours WITHOUT MOVING.  Day 3 they went back to the old way of moving people through (slightly modified) and it WORKED!  While the lines were still horrendous (thanks to the short-sighted underproduction of items), people came in and were led without incident to their respective waiting areas. 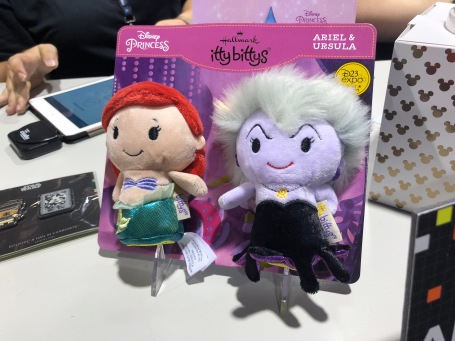 Despite the problems, there were MANY wonderful things about D23 Expo 2019.  On Day 2, I gave up on pins and instead wandered the floor.  There were so many vendors with cool things to sell and to look at.  Personally, I loved the people at FigPin who produce their own line of Disney pins which look amazing. Plus, they have an integrated app for their pins which is just mind-boggling.  I’ll do a whole piece just on FigPin later.  I bought new slippers from the folks at Happy Feet who sell these adorable exclusive D23 Expo slippers with Sorcerer Mickey on them.  Had to get that.  I stopped by Bandai-Namco and previewed the new TsumTsum game coming out for Nintendo Switch (I tell you, I’ll be buying THAT game).  I saw some incredible artwork at Cyclops Print Works, limited edition phone cases from OtterBox, great Hallmark items exclusive to D23 Expo, and so much more.  Did you know Ravensburger, the puzzle people, do MORE than puzzles?  They also produce the ingenious game, Villainous!  I had such a blast talking to people, walking around, eating my Mickey pretzel and Dole Whip – it felt like I was at Disneyland (without the rides). 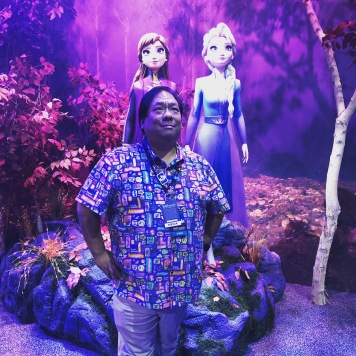 Felt like I was at Disneyland! Enjoying a Dole Whip and a Mickey pretzel while strolling through the Expo

Other than the four stores with highly-collectible items, the pavilions were managed wonderfully!  Loved the Stormtroopers on display in the Lucasfilm area.  Really appreciated the Disney Volunt-Ears pavilion where we got to take part in their mission of becoming a Team of Heroes to children with life-threatening illnesses in hospitals around the country.  The Parks and Resorts pavilion was amazing with all the previews of things to come like the Avengers Compound, the new Epcot, and all the changes coming to Tokyo Disneyland.  Disney Animation did a great job with photo ops, signings, free stuff, and great displays.  Other than BoxLunch (another nightmare), everyone had wonderful opportunities to be in the midst of everything Disney!

There were definitely flaws in the new online reservations system.  It was more than just who got in and who didn’t.  But the execution of it really limited how people could see what they wanted.  Instead of being able to reserve multiple spaces across the Stage / Store / Talent Pass spectrum you should only get one of each – period.  If that meant more people could be guaranteed to see at least ONE thing they were hoping to see, that would seem more fair.  Also, Gold Members should get to go first.  For Hall D23 there was a Gold Member Queue, but in years past, Gold Members got to enter onto the show floor first, too.  And the line for the Gold Member Lounge was ridiculous.  Surely there was a better way of handling that.  Maybe include some of those freebies when you send the ticket?

Despite the ups and downs, I will definitely be going back.  There was too much fun to be had despite not getting my hands on some of the super exclusive stuff.  Besides, there’s always eBay.