Who is your favorite Disney dragon?  For me, Maleficent comes to mind immediately.  She is probably one of the fiercest dragons to be sure, but Disney has a long history with the reptile-like creatures with wings.  Disney dragons come in all sizes and shapes, not to mention personalities as varied as the day is long.  There are funny ones, fierce ones, animated ones, CGI ones, black ones, red ones, and even purple ones (if you count Figment)!

But before they get to the screen or into a theme park, these dragons go through a variety of iterations.  Different designs and different color schemes all play into the development of each character.  One of Disney’s newest books explores all of these images and even ones that never came to be.  The Art of Disney Dragons is a beautiful and informative book that details the secret and not-so-secret history of your favorite fantasy characters. 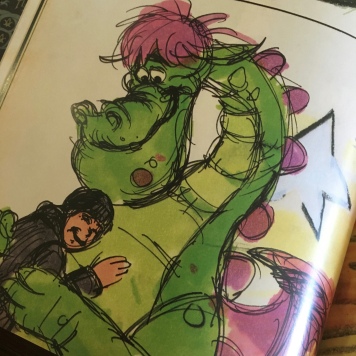 The original Elliot shown as sketchwork

Character concept art – a dragon with fur! Close to the final image for Elliot in the new film

Of course, with Pete’s Dragon set to be released later this year, it makes sense to explore the larger Disney dragon family.  Pete’s Dragon director, David Lowery, offers his definition on what makes a dragon and comes up with three “must haves” – long, serpentine neck; sharp claws; and leathery wings (which would exclude our buddy Mushu).  And argues that dragons CAN have fur!  Hence the look of the new Elliot who looks in my opinion like Sulley from Monsters, Inc. with wings. Of course, everyone has their own interpretation which makes dragons such fascinating creatures.

What makes this book even more special than the artwork is the notes section in the back.  It explains where each of these pieces of art come from, including pieces of art from never-produced segments of a movie, never-developed attractions, and even a dragon image from the lost WESTCOT.  It’s a treasure trove not just of the development of existing Disney dragons, but of dragons that never came to be.  Did you know there was a Dragon’s Lair show in development at Disneyland?  Or that an area to be called Dumbo’s Circus would feature both the 1977 Elliot and the 1941 Reluctant Dragon? There was even a Frontierland attraction that might have featured the Loch Ness monster!

You might expect an art book to be huge as many of them are, but this book is only about the width and height of a comic book and runs about 128 pages.  It is beautifully designed and easy to look through.  If Disney dragons are your thing, this is a must have for your collection.

So who is your favorite?  Figment is the dragon for me, but you might have others that tickle your fancy.  Odds are, you’ll find them in The Art of Disney Dragons.

One thought on “The Secret History of Disney Dragons Revealed”