Beautiful is another “B” word you could use to describe the elegance of the largest Disney Store in the world in Shanghai.  Located outside of the resort in the midst of Pudong, this store is a beauty to behold.  With a clock tower outside and an elegant design outside of the building, the inside carries TONS of unique Disney souvenirs for fans of all ages.  Ranging from the high end jackets and other clothing to little keychains, this store has so much to take home.  We bought a set of beautiful plates exclusive to this particular store, but they had so many other items that were fun to look at including unique Mickey plush, clothing, and much more. 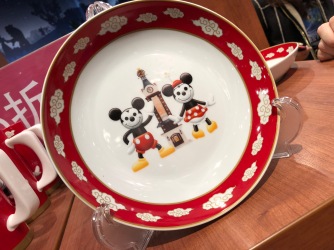 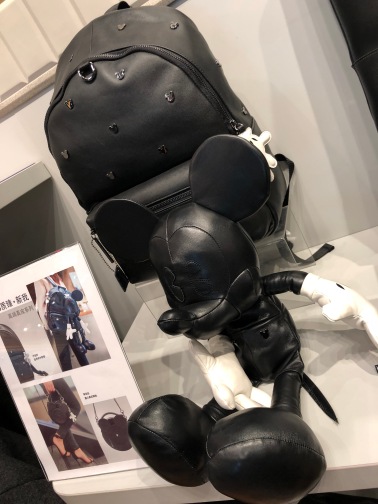 The Disney Store has been around since 1987 when the doors opened to its first location in Glendale, CA.  From that time, Disney Stores have popped up everywhere around the United States and around the globe.  Even though the operations and management of the Disney Store has changed hands during its history (currently all back under the Disney company roof), one thing has remained the same – unique gifts from each part of the world.  Having visited many different stores, I have found a variety of unique gifts from each one.  From pins to plush, there are quite a few terrific treasures found in each place.

Large selection of NY only merchandise at the Times Square store in NYC.

In the United States, the flagship store has got to be the one in Times Square.  While there are tons of stores throughout the country, this one is one of the biggest and certainly one of the most unique.  This huge titan among Disney stores has great products specific to New York city.  T-shirts, Vinylmation, and even really beautiful pins (although the selection has become sparse compared to years past).  In Hawaii, not only can you find unique Disney items at the Aulani resort, but the Disney Store at the Ala Moana Mall has a great selection of Disney specific merchandise.

It’s been a number of years since visiting some of the other international Disney Stores, but they always seem to have fun and unique stuff to collect.  When we went to the store in Paris along the Champs-Elysee, they had exclusive Mickey plush wearing the colors of the French flag and a beret.  They also had toys that spoke in French which I thought were so cute I got one for my youngest daughter who was only 2 at the time (that was nearly 14 years ago!).  It’s fun to hear Winnie the Pooh say “Bonjour” in his best Pooh voice.  Traveling to Venice, the Disney Store hidden among the shops along the canals, I found a Mickey Mouse plush dressed in a classic gondolier outfit.  It is still one of my prized possessions.  And in Japan at the Tokyo Disneyland Resort, the Disney Store in Ikspiari had a plethora of fun and unique gifts.  Something to be aware of, almost everywhere else, t-shirt sizes are much smaller than in the United States.  An extra-large in Paris would be like a medium in the states.  In Japan, it’s almost impossible to find souvenir t-shirts in larger sizes.

The Walt Disney Studio Store is a Disney Store with exclusive studio merchandise! 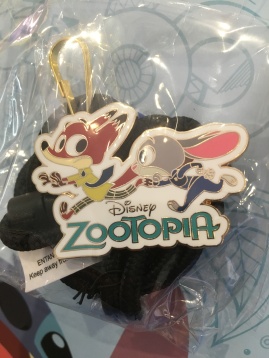 You can even purchase employee merchandise like these lanyards

Exclusive pins and other items are one of the bright spots

One of my favorite Disney Stores to visit is sort of hidden.  If you are lucky enough to visit the Walt Disney Studios, you can visit the unique Disney Store located there as well.  Fun gifts specific to the Studios can be found alongside the kind of merchandise you’d find at any Disney Store in America.  T-shirts, Vinylmation, pins, and other memorabilia again can be found paying tribute to the legacy of this place.  Regardless of where you are in the world, it’s worth it to take a look for a nearby Disney Store.  You never know what you may find there!